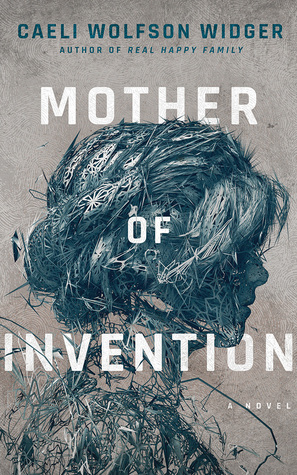 “It’s no longer a question of whether women can do it all. It’s just assumed that we will. It’s assumed that we can be great careerists and mothers and spouses and still magically keep the laundry in check. Which is not only impossible, it’s mass exploitation. It’s keeping women in a permanent state of fatigue and anxiety. I can’t be a part of it.”

Have you ever read a book that you were enjoying and thought it was a solid 3.5-4 star read, only to have that ruined by the last 10 percent of the book? Well, that happened to me with this book. It was enjoyable, and the suddenly it wasn’t.

Mother of Invention follows Tessa Callahan, a Silicone Valley executive and feminist motivational speaker, who is passionate about using technology to make women’s lives easier. We follow her as she heads The Seahorse project, in its firs trial, where they try to test whether accelerated pregnancy is possible. The premise sounded brilliant, and I was really excited to go into this. But the book did not deliver.

I really loved the set up of the novel. The whole controversial accelerated pregnancy mixed in with these feminist undertones, and this other overarching story about a government cover up of natural accelerated pregnancies as medication side effects was really intriguing, and the book kept up with the intrigue. It’s a story that is exciting to read through out and there is a driving force to it, a thread that pulls it forward and makes you want to keep reading.

And I will say that this book had so much potential. It really did. With a premise like that, I think it could have made some really strong points and it could have argued some really valid stuff. But I don’t think it did. This story felt really superficial and hollow to me, like it never really got the point, like it never went beyond these feminist paroles and that it ultimately left them without meaning.

I felt like this book was superficial in many ways, and one of those ways was the plot. The plot isn’t worked through well, and there’s a lot of stuff that’s unanswered and just left up in the air. I feel like there’s not enough grounding in the plot, it just did not feel substantial. I was hoping that the book would have a really strong conclusion, that would tie up many loose ends this book has, but that did not happen.

You know when you’re reading a book, and you feel like the words that a character is saying are actually the author’s attitudes and viewpoints of life? This book does that a lot. I felt like the author was preaching about pregnancy and how reformative of an experience it is, how magical and life altering. And it left a bad aftertaste in my mouth.

Far be it from me to say that pregnancy isn’t that for some women. It is. And it can be. But I really don’t think that’s an experience of all women. And it felt incredibly preachy and judgmental towards women who don’t want children. I just could not get on with the fact that this book stands on a feminist premise, but boggles it completely.

Now I was gonna give this book, let’s say 3.5-4 stars, even with all of the stuff I mentioned above. I was enjoying it. And then. I will go into spoilers now, because I can’t explain why I was suddenly really disappointed in this book.

Tessa Callahan is an incredibly successful woman, who loves her career and finds so much fulfilment in it. She loves her job. And we know Tessa’s married and she couldn’t have kids, but we also know that she never wanted children, it was her husband who wanted them all along. And then the author flips this whole thing into the air. Tessa’s husband leaves her because she works too much. And this felt entirely like saying women who have careers can’t have partners. The conversation between her and her husband was bad. He said something like “I don’t want my job to be meaningful, I want my life to feel meaningful”, and let me tell you, it felt like the author was on his side. AND THEN. Tessa rushes to get pregnant. I kid you not. She gets pregnant and we jump 30 weeks into the future where she has a baby. And it was made like she finally understood what she needed and that was a child and she finally felt fulfiled, which for me was atrocious and I hated it.

I genuinely feel like this had so much potential and was interesting to read, but ultimately, it raised some really problematic points to me (or that’s how I perceived them), which really left a bad aftertaste in my mouth.

Let me know if you have any thoughts on this and if you have maybe heard of this book, or read it. I’d love to discuss!