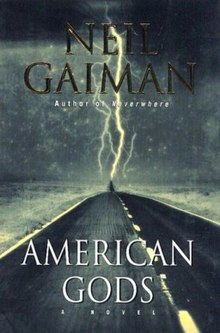 “What I say is, a town isn’t a town without a bookstore. It may call itself a town, but unless it’s got a bookstore, it knows it’s not foolin’ a soul.”

I decided to finally pick up American Gods, which has been on my TBR for ages and of which I had a copy since December. I had the extended, author’s preferred, anniversary edition and I am so glad I got to read that one. This book is now my favorite of the year and I am so amazed by how much I enjoyed the book and the reading experience as a whole.

American Gods follows Shadow, who was just released from prison, only to find out his wife died in a car crash. He encounters a strange man, who calls himself Wednesday and get offered a job which he aspects, and which takes him on a chase across the American Midwest.

As any other non-American person, I learned about America from movies and media, and I have a weird fascination with cross-country roadtrips and the American Midwest and countryside and that’s exactly where this book is set. Gaiman creates a really strong, small town atmosphere and uses motels, farmhouses and roadside attractions as a backdrop to tell a story about gods and I was so impressed and fascinated by how well this was done. This book just draws you in the minute you start reading it and when you resurface you have read a 100 pages without even realizing.

Fantasy books with heavy atmospheres are a my favorite thing to read and this was exactly the kind of atmosphere and story telling I love. There’s a sense of despair mixed with a sense of foreboding and a storm coming that this book exudes, which is exactly what it tries to do and succeeds.

The idea that all the immigrants throughout American history brought over their gods to America, and that the American land is a hotpot of different mythologies and pantheons is just so clever and it makes total sense. Moreover, Gaiman manages to create a perfect blend of all the different mythologies and to incorporate them together so they make sense and work in unison. I really enjoyed that and I found the idea of the book so enchanting.

Gaiman doesn’t underestimate his readers and this book is so intelligent and keeps you guessing at all times. It’s not obvious at all times who exactly are the gods Shadow encounters, but you can still guess at times. I had a lot of fun trying to discern which gods are which or putting the book down and going to research a god that is now mentioned. I loved that. And Gaiman doesn’t use the just the well-known gods. He incorporates slavic deities, pagan deities, Norse mythology, Native American mythology and more to create this whole other world and I just really loved how clever and ingenuitive this book was.

One thing that I found a lot of reviews to say about this book is that it has a meandering plot and storytelling. And I personally love that. It reminds me of Stephen King’s writing, in that it makes a lot of detours, but while I find that in a lot of King’s books that doesn’t make sense, here it did. While Gaiman doesn’t have a straightforward narrative, to me it felt like everything had its place and that everything made perfect sense in the end. Nothing felt excessive or too much, and I really never felt like the book was overbearing. While this kind of slow, meandering plot works for me perfectly, if you’re not a fan of that, I suggest you opt for the non-extended edition. But this ran like clockwork for me.

I love Gaiman’s writing. It’s slow and atmospheric and this book is really quotable. Gaiman tackles some really interesting stuff when it comes to gods and religion and belief and I found myself agreeing with all of it. He also makes insightful points about humans and human existence and I really enjoyed the slightly more symbolic and philosophical undertones of his writing a lot.

Moreover, he manages to blend genres so easily and what comes out is a mix of Fantasy, mystery and literary fiction, all wraped-up in a story about gods in America.

All in all, a new favorite read of the year, which I would highly recommend if you want a read that will completely suck you in. A fantastic, clever and unique book.

I would love to hear from you. Have you read anything by Gaiman? Did you read American Gods? What should I read next from his books? Let me know!

not to be controversial or anything, but this was just…bad.
no thoughts, head empty, just the best cover of 2022 that i absolutely had to have on my feed for the 🌌 vibes 🌌
get in loser, we’re booktube spinning again #BooktubeSpin5
12 books i was recommended by friends or foes that i absolutely must get to in 2022!
book 1 of 2022
here we go! top 7 books of the year because chaos constantly reigns in my life!