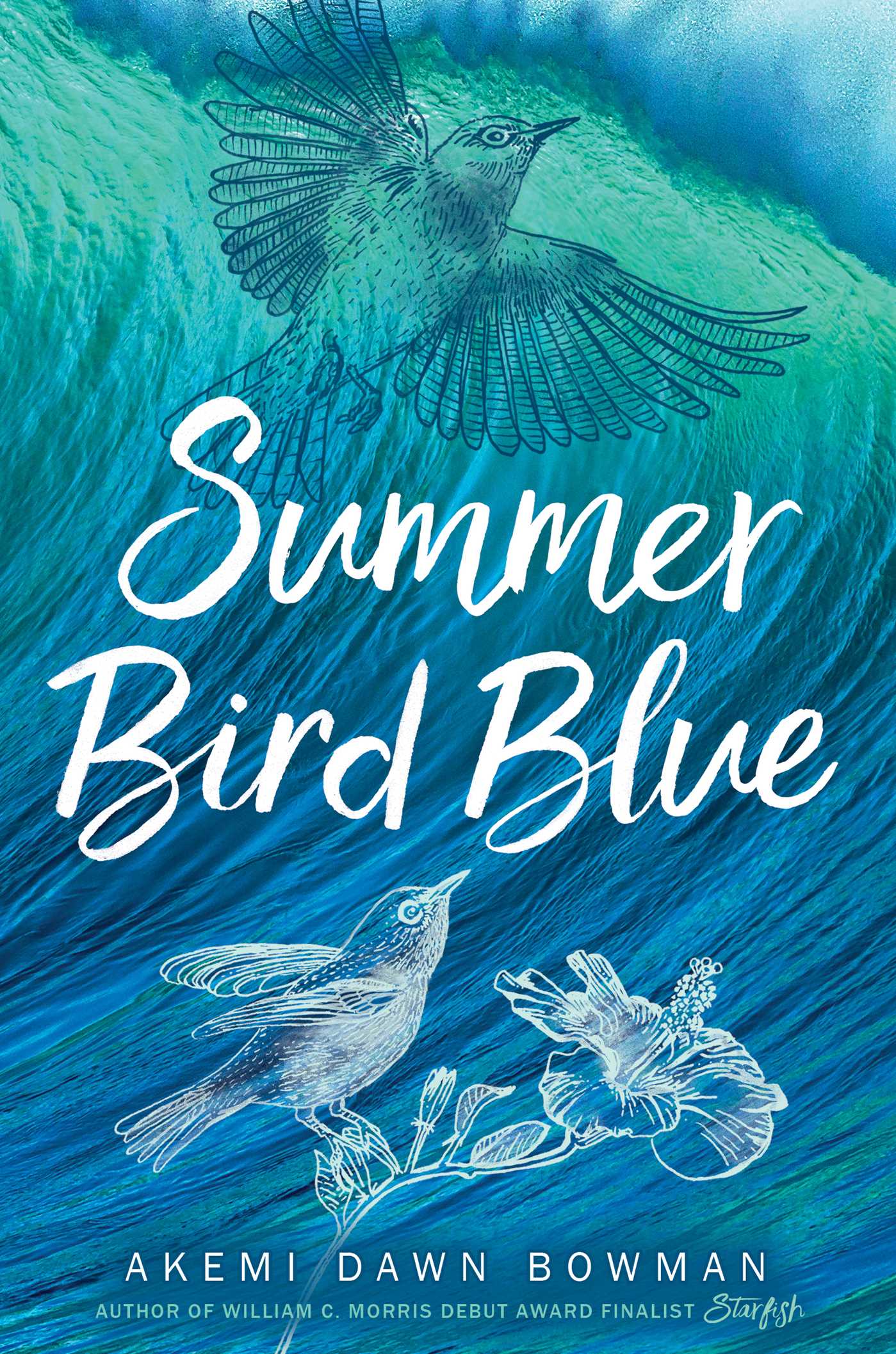 “And just like that, I build a mental wall, one hundred bricks at a time, like I am creating armor out of my own frustration.”

When Starfish first came out, I immediately fell in love with the cover (I am a huge jellyfish fan). And people were loving it, so it naturally went straight to my TBR. I have yet to pick it up, but when I saw Summer Bird Blue on Edelweiss, I immediately had to see what it was about, since you know, the cover is STUNNING. Then I realized that this is about sisters and I knew I was sold. I have a younger sister and I always love reading about siblings, since I can relate to it a lot. And that’s probably why this one hit so close to home. So let’s talk.

Rumi and Lea have always been a duo. They love music and they love writing songs, and they are the best of friends. But after a car accident, Lea tragically dies and Rumi’s mother sends her to Hawaii to her aunt, while she picks up the pieces of herself. Rumi is left alone to navigate her grief and to learn to live alone without Lea in the world.

I absolutely loved Rumi as a character. She’s rough around the edges and isn’t a super loveable person, and I could totally relate to that. She is angry and hurt and lashes out at people, and Bowman manages to make her feel so real and authentic. The way her grief manifests herself and the way  Rumi grows and comes to term with the things that have happened is written and handled really well. She is really insecure at times, and she feels guilty all the time, and feels like she didn’t deserve to live when Lea died. And that was heartbreaking to read, but it was so raw and powerful and I could totally understand it. I feel like Rumi is a fantastic main character, a great focal point of the story, and she allows and gives so much depth to it.

Also, Rumi is on the aromantic/asexual spectrum and she is still questioning her identity and has trouble coming to terms with it and deciding what she identifies as. I think Bowman did a great job at navigating that, and there was even a bit about labels and how they can be restraining to someone and how pressured teens feel to “choose” a label for themselves. While I think that that whole bit was a bit on the nose and in your face, I am incredibly glad that those kinds of discussions are in YA books because they can be extremely important for young people.

Rumi’s relationship to music was also really well done and I really wish someone would record the two songs we see Rumi write. That would be cool.

Like I said, I have a younger sister and this book really hit close to home. I could relate to every aspect of Rumi and Lea’s relationship. The good and the bad parts. Bowman is so great at portraying their dynamic with care and with a lot of depth. She shows their fights, all the jealousy, but she also shows that they were in fact best friends. I started getting emotional from the first page, and whenever Rumi mentioned her sister, I was on the verge of tears. Their relationship was the best part of the story and it’s why this book is a 5 star read for me emotionally.

I really enjoyed all of the characters in this one. Kai, the boy next door, is the type of character I adore. He’s laid back, funny, easy-going and so loveable, and that clashes with Rumi’s personality and creates a wonderful dynamic. And Mr. Watanabe, the cranky old neighbor is again, the archetype of a character I love. He’s surly and quite and frowns a lot, but he’s actually so wonderful. I also really loved the rest of Kai’s friends. They were all so cool and I loved how all of the characters helped Rumi deal, while also allowing her to come to terms with her sister’s death on her own.

I also think Rumi’s relationship to her mother was handled really well. I loved how Bowman was able to show Rumi’s thought process and how her mother leaving her made her feel and why she couldn’t forgive her for that. It was really well written.

There’s an aspect of the structure of the story that I really disliked. Whenever there was a flashback to the past A HUGE subtitle “A Memory” was written in the book. I am not sure if this will only be set up like that in the ARC (I hope so), but it completely took me out of the story every time. I would have preferred that the memories were interwoven into the story instead of just being so cut off from the narrative. It really irked me.

While, emotionally this is a 5 star book, I couldn’t give it that. I had some issues with the pacing. I think the book could have been a little shorter. Because I felt like Rumi’s development became a little bit circular at times, her taking a step forward and then a step back and on and on. I feel like it didn’t happen at a pace I would have wanted it too.

And like said, some of the stuff in this was a bit too obvious and straightforward for me (even though I think it’s important). I just prefer stuff not to be outright told to me. And I get why it was done like that, but it’s a personal preference.

I absolutely loved this novel and would highly recommend it. I think the writing is gorgeous and while I have had some slight issues with it, emotionally this was a 5 star read and I would recommend you pick it up as soon as it’s published!

Let me know if you have plans to read this one and also if you have read Akemi Dawn Bowman’s previous book. I’d love to know!