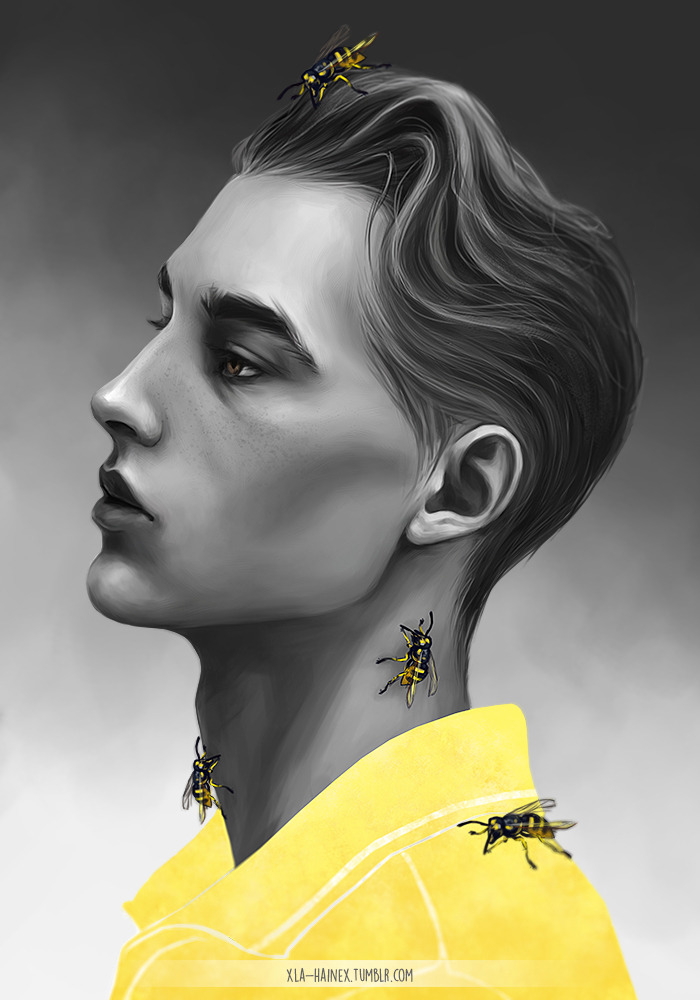 “My words are unerring tools of
destruction, and I’ve come unequipped
with the ability to disarm them.”

Welcome to the newest installment in my Reading Lists Feature, a series of posts where I compose reading lists for and inspired by different characters. These are all books that I feel fit into the character’s aesthetic and personality, but also books I feel those characters would love to read. You can check the previous posts (Ronan Lynch, Hermione, Ron, Kaz Brekker, Nina Zenik, Harry Potter, Luna Lovegood, Inej Ghafa, Iseult det Midenzi, Adam Parrish, Jude St. Francis, Sansa Stark, Wylan Van Eck and Arya Stark) HERE.

This has got to be my favorite Gansey art ever. There’s so much good Raven Cycle art out there, but this one just takes the cake. If you click on it, you will be sent to the artist’s page.

I have talked time and time again how my favorite character in The Raven Cycle is Ronan, but how I relate to Gansey the most. And he is one of those characters that I see a lot of myself in. Gansey is studious and incredibly dedicated, and there seem to be two people to him. One is the sociable and boisterous Gansey and the other is this quiet and anxious boy. He is loyal and really caring and he is plagued by the need to be something more and to find something more. So that’s the vibe we’re gonna go off of. And here’s Gansey’s Reading List.

Are you surprised? No one is. But this really is the perfect Gansey book. It has all the themes that he would enjoy – there’s friendship and family and small towns that become entities themselves (much like Henrietta). There’s an essence of humanity captured in this book that Gansey would surely appreciate. And this book has so much nuance in discussing human nature that I think Gansey would be absolutely enthralled by it.

This just had to be on the list. Of course a boy that is searching for a dead Welsh king would love the story of gods in America. It ticks all of the Gansey boxes. There’s small towns and history and epicness and these god-like figures that also end up being very human. Nothing is as it seems and there’s a sense of urgency in this book that Gansey is really familiar with. Just like Glendower came to America, Gaiman’s gods did too, and it’s just the most perfect Gansey pick ever.

3. We Are All Completely Besides Ourselves by Karen Joy Fowler

I am not sure if I told you about this book before, but it’s amazing. It’s a story about family and self-awareness and personal growth and discovery. It’s also about the effects of a certain type of upbringing and a certain type of family. It’s about how people around us shape us and it deals with all the complexities of a family in a very new and refreshing way. Of course, Gansey would be obsessed with that. This book also does really interesting things with chronological set up, and as we all know, the Raven Cycle is in fact a cycle and I think Gansey would appreciate how time is handled in this one.

I think Gansey would enjoy poetry a lot, but only a specific kind of poetry. I think that this is the only poetry collection I loved to this day, and I think Gansey would too. It’s Faber’s homage to his late wife and it’s incredibly angry and heartbreaking and there’s this discussion of how you should act and what you should feel as opposed of what you do and how you really feel. It’s something that Gansey could relate to a lot. And I just think he would love the way Faber writes.

5. In the Shadow of Statues: A White Southerner Confronts History by Mitch Landrieu

Gansey is a big history buff and I think he would read all the non fiction. On top of that, Gansey is a white southerner who is plagued by that fact. He is a rich white boy who is terribly frightened of the fact that that is the only thing that he will ever be and that his life won’t have any meaning. I think he would really love this because he is a white southerner who would have a lot of issues with his history. This is a book written by the mayor of New Orleans who decided to remove Confederate statues from the city and his look at racism and race in America. I think this would really be a great pick for Gansey.

6. A Little Life by Hanya Yanagihara

I know, I know. This book again. I honestly debated whether or not I should include this in the list because I talk about it constantly. But the thing is this is the ultimate Gansey book. It’s incredibly pretentious, it’s academic and studious and it’s a book about friendship and privilege among other things. Not to mention that Jude reminds me of Adam and Willem reminds me of Gansey. It just works perfectly and I know Gansey would love this novel.

And that my friends is finally Gansey’s reading list. I would love to hear from you! Do you like my picks? Do you have any of your own to share? And please leave me recs for future reading lists in  the comments!