You are entitled to your own opinion but you are wrong.

I guess this is now a new feature on the blog! I did posts like this previously and you can find them HERE. But you liked them which 1. thank you and 2. means I want to do more of these.

I am gonna be pulling negative reviews from Goodreads (or some of my friends) of some of my favorite books and then I am gonna be reacting to them. This is gonna be sad and fun, which is exactly what we aim for here on Inside My Library Mind. So let’s get into it.

DISCLAIMER: I am using reviews that are available online. I don’t want anyone to be offended and I am just doing this for fun. If we don’t like the same books, that’s great and that’s the beauty of literature. So that’s that! Here we go!

I just reread this so I am in my feelings about it, but I really love this book and the whole series. I think giving a modern twist to greek mythology is really fun, and I love the way Riordan portrays the gods and the myths in a modern setting. On top of that, I really enjoy the characters and the banter of the series, and I feel like the series continually gets better. I love the themes of what it means to be a hero and friendship that are explored in here and I just think it’s PURE FUN so yeah. Let’s hear from people who don’t like fun.

“Not to sound pretentious and oh-my-look-at-me-I’m-too-good-for-a-gripping-read-ish, but I didn’t like the writing style. The sentences were short, the ideas really not challenging, and the reading level about 5th grade.
I could have lived with that, but I’m a mythology purist, and this is less about exploring Greek mythology than killing/defeating/cracking jokes about/modernizing the Greek gods. Sure, the Greek gods, in real life, would probably have updated to GreekGod 2.0 (new! Togas replaced by Hawaiian shirts and jean capris!), but I’m still a purist, and it seems like an insult to Poseidon to stick him in Hawaiian shirts and capris, and to have Ares turned into an annoying muscly motorcyclist.”

My reaction: I am sorry to report, Silver Prion Chemistry the Martian Blob, that you did, in fact, end up sounding pretentious. Always fun to hear adults criticizing books for younger readers for being written like books for younger readers. Ah yes, the mythology purist in you SNAPPED, Blob, truly. A person cannot help being a mythology purist, but you’d think they’d go for a different book than one who’s blurb definitely promises cracking jokes about greek gods. Life is hard for a mythology purist, my friends.

“As an avid reader and one who looks for real beauty in writing, this book was so disgusting that I will NEVER pick it up again! It was so superficial and packed with blockbuster action garbage that basically screams, “I deserve to be on the big screen!”
…
Plus, when did the danger ever stop? Percy’s life was on the line every five seconds!
The entire tone of the book was atrocious. I did not see any actual serious tone in here. It was very hard to take seriously.
The entire novel is a joke! Riordan should really be ashamed of himself for writing something as corny and cliche as this.***This book is clearly for people who do not like reading***”

My reaction: Amber, girl, who hurt you? Calling a book disgusting because it’s action-packed is… a choice, especially when it’s a Middle-Grade novel meant for a younger audience. Again, love that for us. ALSO, Amber you’re clearly an avid reader because you pointed that to us so we don’t forget, but it seems to me you did not read carefully enough, because Percy never being safe IS THE WHOLE POINT THE BOOK IS MAKING. This review is clearly for people who do not get that sometimes books that are written for younger people are GET THIS for younger people.

It’s Painful to Think That Some People Hate This – Red, White & Royal Blue by Casey McQuiston 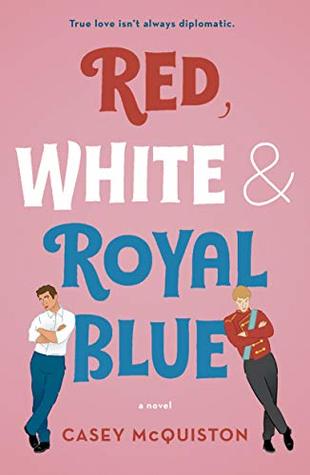 This is going to be one of my favorite books of the year and it genuinely made me so happy. I think it’s a lovely, joyous, hopeful read, with fantastic characters and a really realistic portrayal of relationships and identity and I think the world of it. It’s also super funny and manages to portray young people realistically. It also leaves you feeling so happy and hopeful and I am already desperate to reread it. I just have feelings about Alex and Henry, okay? Here’s my review, and let’s hear from people who are WRONG.

“Still can’t wrap my head around the hype and fanfare surrounding this book. It’s so disingenuous and smug. Like, why are most of these rave reviews from teenagers?? What a sick scheme to get people to read your book, by marketing adult stories to kids. Truly, it’s written as if someone took a God-awful YA tumblr post/idea, and stretched it into one overlong, la-di-da AU President Hilary fanfiction. Look underneath the “cute” story wish-fulfillment blanket, and see that it’s actually pretty damn toxic. There are better, more deserving, and less mean-spirited lgbtqia books to read out there; Books that have substance beyond the surface appeal of a fangirl/boy wet dream read… “
…
“(Not to sound nit-picky, but…)— cool. Another politically-charged book out to vilify Republicans. I get it: it’s AU liberal wish fulfillment about the First Family. They’re Democrats. I’m fine with that, obviously, because I don’t judge people or outright reject anyone based on political affiliation. But couldn’t this book just leave out all the name calling, ignorance, and horrible right-wing stereotyping?”

My reaction: Now, Kyle, you can dislike this book and that’s all fine, but what do you have against teenagers? People really dislike teenagers and that’s rude??? Like some of my teen blogger friends are better at reviewing than I can ever be, so you are objectively wrong here. I will say that this book’s marketing as NA wasn’t that successful, but that doesn’t affect the book at all. Yes, this is a President Hilary fanfiction, but maybe check why that bothers you so much. Also, the Republicans and right-wings really don’t need Casey to vilify ’em 🙂

“I read a sample…that was MORE than enough, ugh!! What is it with American ‘authors’ and their overt fascination with British royalty?? Could it be jealousy perhaps?? I haven’t read a decent royalty story yet that was written by an American writer I’m afraid. Everything is just so cheesy, OTT and error strewn that it’s quite laughable – even for me as a mostly couldn’t care less inhabitant of the British Isles. There are NO stereotypes over here…for goodness sake, stop assuming we all speak like the Queen, play polo and take afternoon tea…WE DON’T!!”

My reaction: For a mostly couldn’t care less inhabitant, they seem pretty riled up by this. Also, we know you don’t all speak like the Queen but since this is about royalty… they should speak like the queen? Is Bev actually saying this book is accurate? WHAT A LEGEND.

I truly get why some people might dislike this one. I loved it, but I am an enemies to lovers trash and this particular one really did a number on me. I love the banter between the characters and I love the slow burn, and this just had all the tropey goodness I love including the one person being sick and the other taking care of them. Chef’s kiss on that. And just like never have I been so moved by a scene of two people holding hands and watching a medical soap opera. But this book is really flawed and I am not gonna deny that ever.

“bad boys who act like shit to you and make fun of you and your family but are secretly in love with you is a stupid trope and is designed to second guess our own experiences with motherfucking sexist jerks. People who act like dicks to other people for no apparent reason are stupid and should be burned in the lowest pits of hell and it is not the job of lovely, quircky, and self-sacrificing girls to peal off their layers even though they act like shit to them and bring out the disappointing good parts of him. Some people are bad and there’s nothing you can do about it and it is NOT your duty to fix them. FUCK JOSHUA THE CAVEMAN

Also, I hope Joshua eats rotten strawberries and die and Lucy gains some sense and find a sexy, NICE guy.

THANK YOU FOR COMING TO MY TED TALK.”

My reaction: The rotten strawberries part made me laugh so I had to include it. This is a valid review, but I also feel the complete opposite way. I think Lucy is the one who’s awful. She can be really judgmental of other women, she is constantly awful to Josh, while he is the one that as soon as she finally says she is not comfortable with the way they step on each other constantly, IMMEDIATELY stops being mean to her. While she continues to be awful and childish and unbearable. So. Again, this book isn’t perfect so I feel like any critique is valid, but I just think it was the other way around and that there are a lot of romances that excuse bad boy behavior, I just don’t think this was it.

“One word for this book.

I had the highest hopes for this book. I do not understand why modern day romance has to encounter sex, sex and more sex?

What ever happened to good, courtly love? The one where touching was not necessary until marriage? Where the touch only happened through the commitment of marriage?

I do not understand these stupid modern day romances and their load of bull garbage.”

My reaction: WE LOVE AN OPINIONATED QUEEN. This book is pretty lowkey on the sex, Mary, compared to others. Yeah, the good old times of not touching until marriage, actually not even meeting your husband before marriage. Truly the good times.

And that concludes another reacting to negative reviews post! Let me know how you liked this, if it was fun for all of you and what you think of these books! Do you agree with me or the reviewers (you know the right answer to that)?