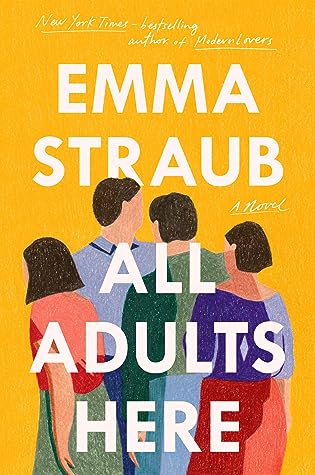 I have to say that stories like All Adults Here always draw me in, despite all of them sounding really similar. Give me a family struggling with life and (mostly) with each other and I will eat it up. Suburban and small-town drama always does it for me, and books that go deep into familial relationships are always my favorite. For someone who enjoys character work and especially relationship dynamics of all kinds, All Adults Here sounded really good – a large cast of characters that are all from one family, that are all struggling and a lot of their issues and struggles stem from one another. However, this book did not really hit the mark for me.

All Adults Here follows the Stricks – there’s Astrid, a sixty-something widow who starts questioning her life and her relationships with her children after she witnesses an accident in her town. There’s Porter, her daughter, newly pregnant but unable to move on from her adolescence.  There’s Cecilia, Astrid’s granddaughter who is shipped away to live with her grandmother after an incident at her school. There’s also Astrid’s two sons who are both unfocused in their own ways and there’s Cecilia’s new friend at school… YOU GET IT, THEY ARE ALL WHITE, FAIRLY RICH AND HAVE ISSUES AND NEED THERAPY.

This book is incredibly accessible and highly readable. The story flows so well and it’s a really engaging read, which has been refreshing for me personally, since I had a hard time focusing on books lately. This was also at times charming (especially when it did not try too hard to be) and some of the characters were interesting.

I found some of the storylines to be way better than the others – the book switches between a lot of perspectives, but I enjoyed Cecilia and her friend’s storylines the most. I think Cecilia was one of the most believable and well-written characters in the novel, and one that never ebbs on the annoying side like so many of the others do. I wish we spent more time with her on the page.

I also have to say that this was, at times, heartfelt and had some emotional moments and little nuggets of the kind of stuff I usually look for in these kinds of narratives. The audiobook is fantastic and I really wish I read the whole book on audio! I received an ALC of the book through Libro.fm which I LOVED and would highly recommend you check them out. It’s a service that allows you to buy audiobooks through your local bookstore, which I think is pretty neat. I would have definitely liked the book more if I read it all the way through on audio, but alas, I only got the audiobook when I was like 70 percent into it.

Once again, the negatives outweigh the positives for me. First of all, this book tries to do too much on a lot of different levels.

We move between too many different perspectives which leaves the book feeling unfocused and like the author was not sure what kind of story they wanted to tell. This also doesn’t allow for a lot of real character development or work. For a lot of the characters we get only a glimpse, and it sucks that some of them were the most interesting ones (like Elliot’s wife, Wendy for example).

The book also tries to deal with too many different issues, which in turn leads to it not handling any of those issues well or with any kind of nuance or care they necessitate. There’s the exploration of gender identity in here and trans issues which was not my favorite, because I felt like it failed to really give it proper attention. There’s also exploration of sexuality, bullying, adultery, abuse but none of those issues were explored in-depth and were handled really superficially.

This also got boring and repetitive and after a while, the book lost any sense of purpose or direction. The story was going forward but there was no plot, no character development, no resolution of the established relationships that was satisfying. The book just went nowhere and did none of the things it tried to or set up in the beginning.

This also veered into the vapid and annoying territory quite a few times, and I can’t say that I particularly got attached to any of their characters which left their issues feeling flat rather than something to engage with. I had a hard time justifying some of the characters’ actions and an even harder time understanding their motivations and emotions. It just did not translate for me.

Ultimately, this book was a disappointment. It was easy to read and entertaining at times, but it tried to do too much and it did not do any of those many things really well.

I would love to hear from you! Have you read this one or any of Straub’s previous novels? Should I still try some of her novels? Let me know! .

5 thoughts on “Everyone is Annoying: All Adults Here by Emma Straub”