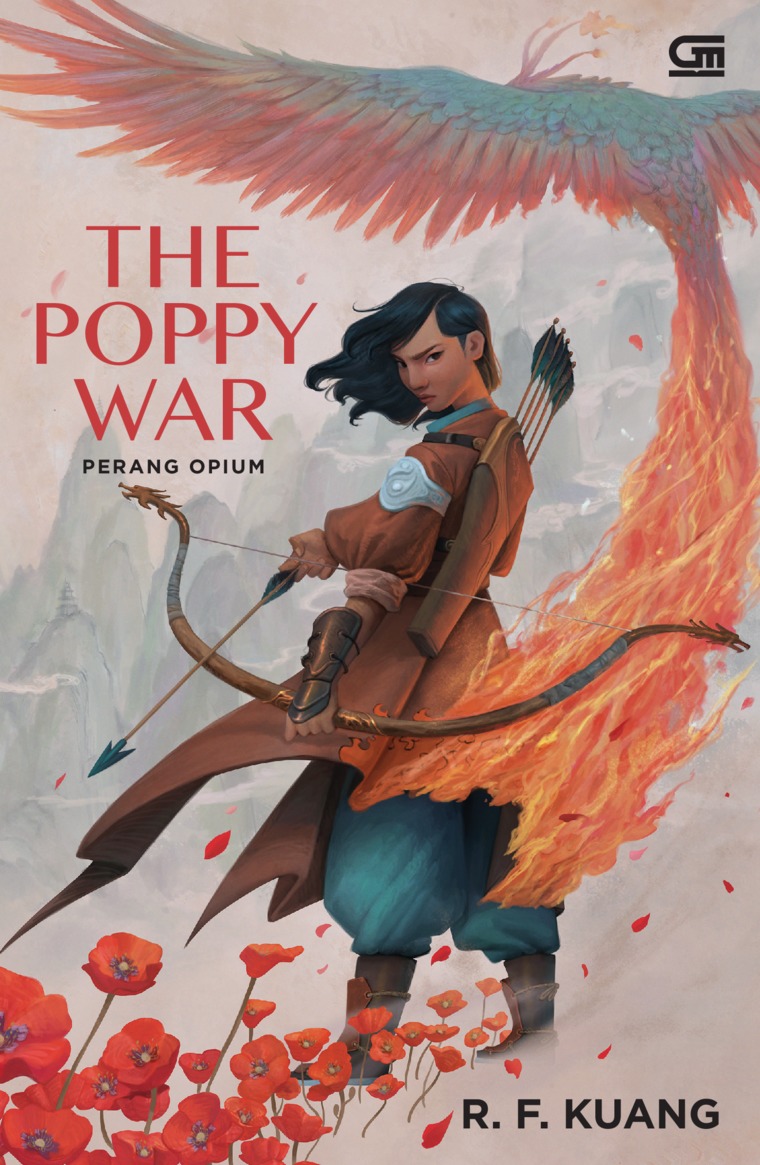 I’ve been meaning to read The Poppy War ever since it started making rounds in the community, but ever since I got super busy, I tend to save longer Fantasy books for the hypothetical situation in which I have more free time. But I just have to accept the fact that I never seem to have free time anymore, and longer books take me like a month to read. The Poppy War was a victim of that mindset plus I meant to put it on my backlist TBR and then didn’t (which is a good thing because I read TWO books from that list, FOR SHAME). This was a long-winded way to say that I finally decided to read The Poppy War and it was MAGIC. AND PAIN. AND I LOVED IT.  That’s the Indonesian cover and it is GLORIOUS.

The way R.F. Kuang writes just for me

It’s very hard for me to start this review in a coherent and meaningful way besides saying HSKWNCBSBCKJ so I am gonna just start with the writing, which was so good and worked PERFECTLY for me. It’s been a while since I’ve clicked with an author’s style so instantly and so completely since Sally Rooney, but like a lot of other things, R.F. Kuang did that. There’s a quality to her writing that reminds me of a contemporary book and while The Poppy War definitely has a rich and complex world, R.F. Kuang gets you settled into the story so quickly. Usually, with Fantasy, it takes you a while to sink your teeth into the world and the story, but the way Kuang writes is so familiar and comforting.

Until she ruins your life, naturally.

She writes in such an engaging way, and her writing feels powerful in a way. It feels like she chooses her words ever so carefully, she doesn’t embellish and overwrite things and then she just delivers a phrase that keeps repeating itself in my head. Definitely enjoyed the writing in here and it was so refreshing.

This world is brilliantly and intricately constructed

This series is inspired by Chinese history and the Second Sino-Japanese War, and I think the world explored in here is really interesting. The way magic and fantastical elements are interwoven into the story is so gradual and really well done. I really enjoyed the school setting in the first part, and found it to be really compelling, with a super cool concept. My favorite part, however, was the politics. This is a really political, warfare strategy heavy book, and I LOVED that. The intricate politics of different nations, the way they interact with each other and all the layers that are tied into the history of a place is one of my favorite things to read about, and I love how that was introduced into this book. I will say that this book sometimes relies on the “teacher telling a history lesson” trope for the world-building, which is quite possibly my most hated way to handle world-building, but I did not mind it that much in here, mostly because I loved the school setting and the teachers in it. I also loved the magic in here, that relies on gods and shamans. Whenever there are deities involved, the magic just works for me, and this was no different.

I have to say that I did not expect this book to be so dark. But this has a lot of trigger warnings, since it really does not pull any punches. The war is depicted so realistically and all of its dreadfulness is laid bare in here and it was really harrowing to read this at times. But I think the way themes of war, PTSD, the toll war takes on little villages and provinces, and trauma is so well done and it’s done with respect and care and yet so much insight and understanding. I really appreciated that. The one thing I will say is that the shift in tone and pace was not my favorite thing. I think the tone shift was very jarring and abrupt, but there is a point to be made that that’s exactly how war is. The same goes for pacing – the pace was uneven throughout the book which took me out of the story a bit. But still, these were just minor things that really did not compare to my love for this novel.

The characters own me and can step on me

This cast of characters is spectacular and I was utterly obsessed. Rin has a single brain cell and I can relate. On a serious note, Rin is definitely an antiheroine who makes poor choices, and who you love with your whole heart and want only the best for in life.

Every single thing Rin does is an act of pure rebellion.

Rin’s need to prove herself and fight against the people in power who oppressed her reflects in all of her choices and while she can be frustrating at times, you are constantly rooting for her. Seeing Rin become the top student and soldier and warrior was such a wonderful journey and I loved her arc even when I hated it.

Her relationships with other characters were also magnificent. I loved Kitay a lot and he is such an endearing asshole that I loved every minute that he was on the page. I also think his and Rin’s friendship is so great. However, I think the relationship of this novel is between Rin and Altan, and I think it was written so well.

Seeing Rin getting attached to Altan and then becoming so close to him through shared trauma and feelings of being treated as less than human was explored with so much nuance. I think Altan is an incredibly accomplished character. I don’t like him at all, but I cannot deny that he is superbly written.

I have feelings about Nezha and Rin – their dynamic hits all the angsty feels in me and I will hold off on commenting on anything until I read the next book but I feel like R. F. Kuang said ZUTARA RIGHTS except both Rin and Nezha are Zuko. WE’LL SEE, OKAY? Nezha is an asshole, and not an endearing one, but he has depth and we love when assholes have depth. If they end up having something (please), R.F. Kuang wrote the ultimate hate-to-love bully romance without the bullshit of the romance genre and where both characters are bullies. If they go from hate to love back to hate and then an ultimate last act of love, I WILL BE SO HAPPY (I may have some issues, it’s fine, we don’t talk about it).

THIS WAS GREAT, go read it and then come talk to me about it and .

I would love to hear from you! Have you read this one yet and why not? Let me know in the comments!

20 thoughts on “This Book Lives in My Mind Rent Free: The Poppy War by R.F. Kuang Review”