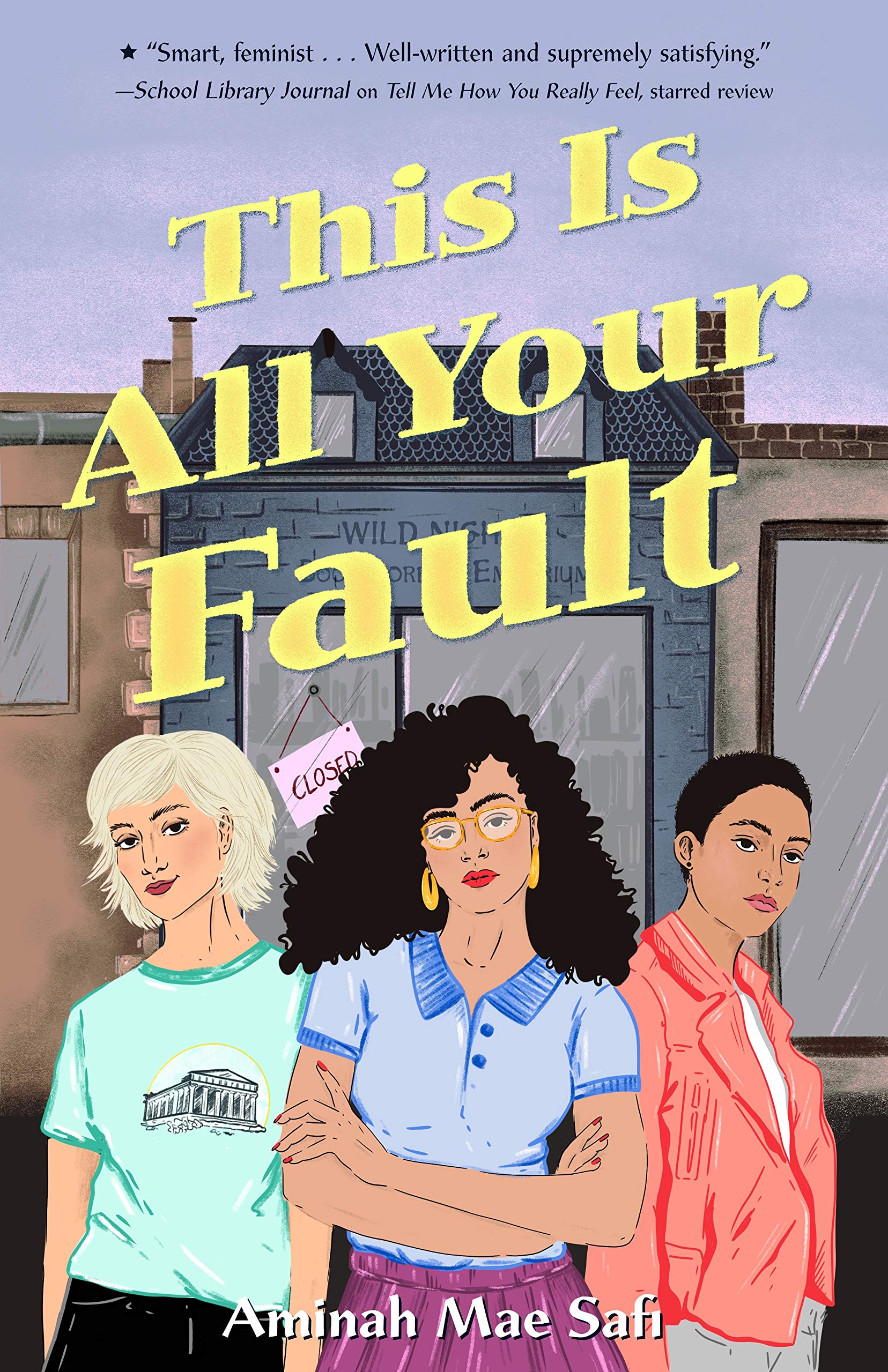 Can you think of a better premise than three girls working together throughout one day to save the bookstore they all work in? I can’t. This is exactly what the premise of This is All Your Fault by Aminah Mae Safi is all about, and when I first read it, I was super excited to get to this book. It held all the promises of a great YA contemporary – it had female friendships, it had a bookstore and it was diverse. I was hoping to get a great story, and that’s exactly what I ended up getting.

In This is All Your Fault, we follow three girls – Daniella, Rinn and Imogen who clock into work at Wild Nights Bookstore on the first day of summer, only to find out that their beloved bookstore is closing. Throughout the day, the girls deal with life, try to help the bookstore, and even end up becoming friends.

I really enjoyed this one a lot. It took me a while to get into it, but when I did, I ended up really liking it, and that was mostly due to the characters (yes, like in any book I read).

I found the characters to be really believable and I found their struggles and issues really relatable and honest. My favorite by far was Daniella, and it is definitely due to the fact that I see so much of myself in her (I am very vain in fact). She comes across as this really cold, uninterested person to everyone around her, but she also has this poetic side to her that she hides almost violently. I loved reading about her growth and her trying to show the world this different side of her and be vulnerable, which is really difficult to be. Her characterization was great in my opinion.

Same goes for Imogen. I loved her as a character. She is really feisty and determined, and she’s super blunt and honest, which I always appreciate in characters. The depression that Imogen is going through is handled really well in my opinion, and her struggles with her mental health really resonated. I think her character arc was also handled amazingly well.

The star of this novel is surely the relationship developing between these three girls. They were not friends at the beginning of the novel, so I really liked how their friendship developed, and I think their differing dynamics were handled super well, and provided really great foundation for their friendship. This became a prominent focus in the second half of the book and it totally made the book for me. As this was set during the course of one day, I really liked the fact that some of the side-relationships were pre-established, it really helped to contextualize the characters.

However, I did have some issues with this. First of all, the plot of this is so flimsy and does nothing for the story. It’s also quite annoyingly set up, with the whole thing stretched out unnecessarily, especially in light of the fact that the plot was so daft. I think the story took a while to get going, without really needing to, because the first half of this doesn’t do much in my opinion.

I also wasn’t the hugest fan of Rinn’s character, mostly due to the fact that she was a booktuber. I find stories about social media really tiring, and they never feel organic or realistic to me, and it was no different here. Maybe it’s due to the fact that I spend so much time in the online book community as a blogger, but I just found any mention of that aggravating. For example, Rinn would talk about how she is always thinking of things in terms of lighting and what would look good on a photo, and I just kind of rolled my eyes at that.

Finally, even though the whole “set during one day” thing worked sometimes, at other times it did not make more sense, because we did not get enough background information on certain parts, like the girls’ relationships with their families.

Overall, I really enjoyed this one. If you’re looking for a good YA contemporary that focuses on female friendships and realistic struggles, I would definitely recommend this one.

I would love to hear from you! Are you excited to read this one, and have you read any of Safi’s previous work? Let me know!

One thought on “Review: This is All Your Fault by Aminah Mae Safi”