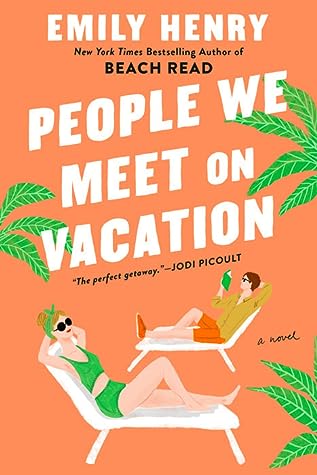 Goodreads blurb: Poppy and Alex. Alex and Poppy. They have nothing in common. She’s a wild child; he wears khakis. She has insatiable wanderlust; he prefers to stay home with a book. And somehow, ever since a fateful car share home from college many years ago, they are the very best of friends. For most of the year they live far apart—she’s in New York City, and he’s in their small hometown—but every summer, for a decade, they have taken one glorious week of vacation together.

Until two years ago, when they ruined everything. They haven’t spoken since.

Poppy has everything she should want, but she’s stuck in a rut. When someone asks when she was last truly happy, she knows, without a doubt, it was on that ill-fated, final trip with Alex. And so, she decides to convince her best friend to take one more vacation together—lay everything on the table, make it all right. Miraculously, he agrees.

Now she has a week to fix everything. If only she can get around the one big truth that has always stood quietly in the middle of their seemingly perfect relationship. What could possibly go wrong?

Last year, I read and really enjoyed Beach Read by Emily Henry (despite me feeling like it was not truly a romance), so I was really excited to read Henry’s next release. People We Meet on Vacation (or Me and You on Vacation, as it is being released in the UK, for some bizarre reason) has a great friends-to-lovers romance, but it’s NOT a great friends-to-lovers romance book. Let’s discuss.

First of all, I think that the actual romance between Poppy and Alex is amazing, and there’s a lot of great tension there. Poppy and Alex were best friends, but they got in a fight, and are now on a trip together to try and patch up their relationship. This is a fantastic setup for excruciating angst and Henry does deliver on that part. Unfortunately, the author also decided to bog down the romance and bury it deep under unnecessary and dull stuff.

I hate to inform you that Poppy is a travel blogger, and not only do I personally find travel bloggers annoying and borderline offensive, I just think that it was a particularly poor execution. The story is so overburdened with descriptions of travels and places, but one that reads like it was largely inspired by Wikipedia. It is so vapid and devoid of any sort of real exploration of the place, and it feel very much like the stereotypical tourist trying to be CULTURED by going to PARIS. There’s always a note of privilege to it that I just find irritating. I think Poppy’s wanderlust and general descriptions of travel read so disingenuously. Moreover, while I do enjoy the stoic, bookworm, introverted guy meets quirky, FUN girl trope, I just think that it’s a slippery slope to writing a terribly frustrating character archetypes, which is exactly what happened here. Poppy is supposed to be this different, free-spirited, spunky gal, but we never really get to see that, we just keep getting told that’s how she is. There’s also a scene that read so “stuck in 2010s” where Poppy is feeling insecure about “other girls” on social media and Alex says to her something along the lines of they’re not real, but you are. It was also framed as this MOMENT, when in fact it was just stupid.

One other thing that I think was a huge detriment to the story is that we do not know exactly why they got into a fight until the very end. This made the pace of the novel too slow, and it was detrimental to actual emotional connection to the story because it was so dragged out. Instead of catching the reader up, we had to suffer through terrible descriptions of their past travels, that were maybe 20 percent their interactions (which were GREAT!! that’s so frustrating!!) and 80 percent vapid descriptions of travel that were uncandid and boring.

Overall, a great romance buried under piles of NO THANK YOU for me. I do see people enjoying this one, but I am not one of those people and I think there are much better friends to lovers romances out there (but they are not traditionally published and packaged into some sort of women’s fiction thing but that’s neither here nor there).

*I received an e-galley of the novel through Netgalley from the publisher. All opinions are my own.

this is Elena Ferrante's My Brilliant Friend and I am super excited to jump into this one and finally experience Ferrante's writing!
Going Dark: The Secret Social Lives of Extremists is a recount of Julia Ebner's experience of joining various different extremist social media groups and channels - ranging from neo-nazis to Jihadi brides.
decisions were made today and i am rereading truthwitch!
🏙today on the agenda - One Last Stop review! 🚈
cusk hive, can we talk about the superiority of the serbian editions of the outline trilogy?
everyone is surprised but I managed to finish a book or two this month! and one of those was detransition, baby!