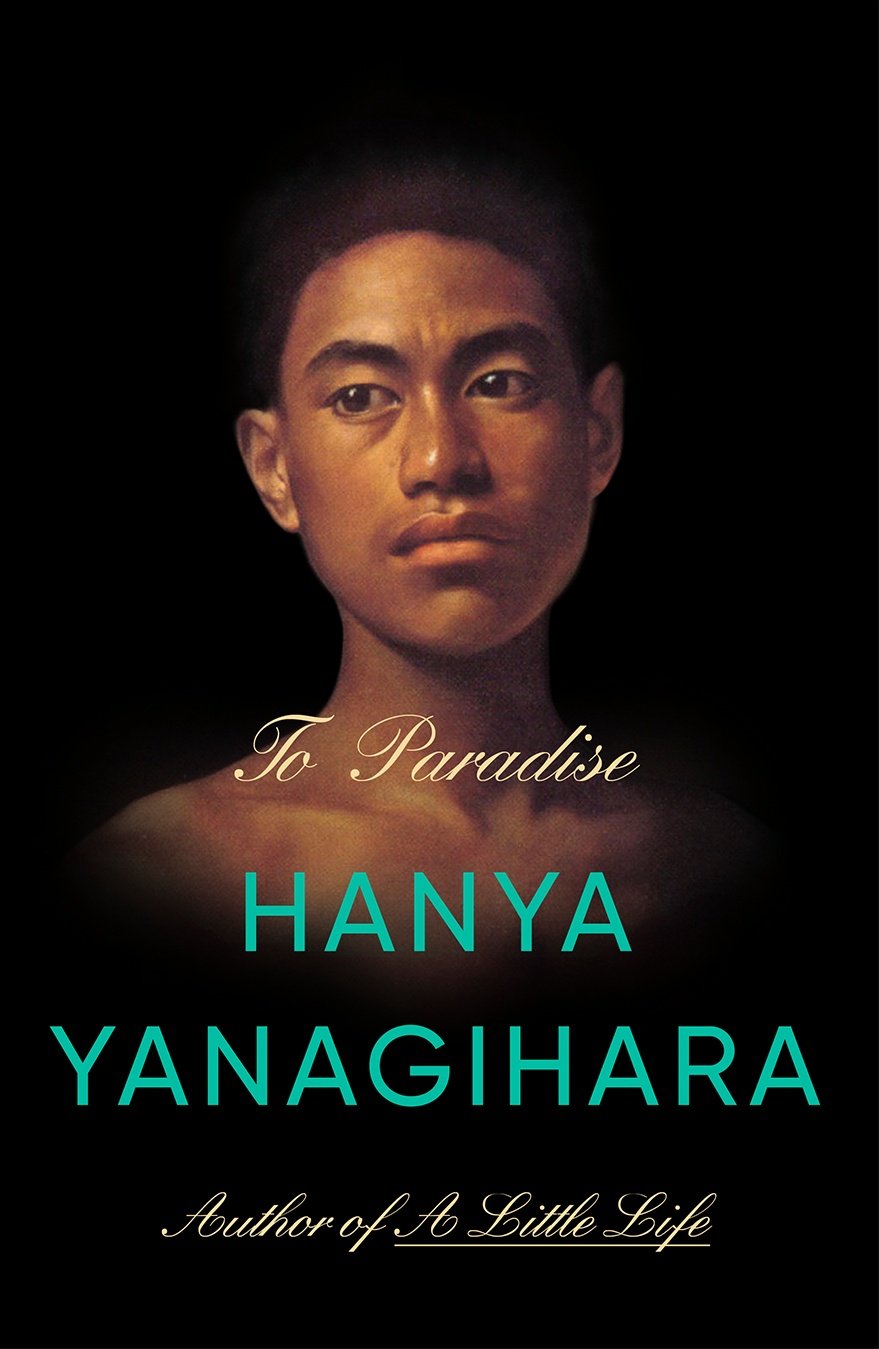 Goodreads blurb: In an alternate version of 1893 America, New York is part of the Free States, where people may live and love whomever they please (or so it seems). The fragile young scion of a distinguished family resists betrothal to a worthy suitor, drawn to a charming music teacher of no means. In a 1993 Manhattan besieged by the AIDS epidemic, a young Hawaiian man lives with his much older, wealthier partner, hiding his troubled childhood and the fate of his father. And in 2093, in a world riven by plagues and governed by totalitarian rule, a powerful scientist’s damaged granddaughter tries to navigate life without him—and solve the mystery of her husband’s disappearances.
These three sections are joined in an enthralling and ingenious symphony, as recurring notes and themes deepen and enrich one another: A townhouse in Washington Square Park in Greenwich Village; illness, and treatments that come at a terrible cost; wealth and squalor; the weak and the strong; race; the definition of family, and of nationhood; the dangerous righteousness of the powerful, and of revolutionaries; the longing to find a place in an earthly paradise, and the gradual realization that it can’t exist. What unites not just the characters, but these Americas, are their reckonings with the qualities that make us human: Fear. Love. Shame. Need. Loneliness.
To Paradise is a fin de siècle novel of marvellous literary effect, but above all it is a work of emotional genius. The great power of this remarkable novel is driven by Yanagihara’s understanding of the aching desire to protect those we love – partners, lovers, children, friends, family and even our fellow citizens – and the pain that ensues when we cannot.

Just to get this out of the way, A Little Life is possibly my favorite book of all time (it’s hard to say because I am physically unable to reread it, but I at the very least loved it and think about it to this day) and I think that drawing comparisons between it and Yanagihara’s new “novel” is natural. It also greatly colored my expectations of this book, which were incredibly high. So while some might argue that it’s unfair to make that comparison, you have to understand that I simply could not care less.

As is pointed out in the blurb, this is supposedly a novel in three sections, but it truly isn’t. These are two novellas and a full-length novel that truly do not make a cohesive whole. So while this is probably completely on the marketing, we will nonetheless blame it on the novel and Yanagihara herself because life is often unfair like that. The blurb states that “these three sections are joined in an enthralling and ingenious symphony“, and I just would like for whoever wrote that part of the blurb to make a public statement to explain to us what exactly is enthralling and ingenious in making no ACTUAL connections between these three parts BESIDE using the same names for people. You could argue that there are THEMATIC ties between these parts, but there could be thematic ties between any two novels, which doesn’t make them a whole by any means. The thematic tie is that rich people deserve no rights and also that there is no actual paradise i.e. happiness, meaning, fulfillment to be achieved no matter how we try to do it. As a whole, I don’t think this works, and on their own I think these stories are incredibly dull and unimaginative. I promise you that Suzanne Collins could have written To Paradise, but Yanagihara could have NEVER written Hunger Games, meaning she wrote a ya-dystopian-styled story and it was just not good. Even more, that last part also has two separate (but actually connected at least) storylines, and it’s as if Yanagihara just could not choose what story she wanted to tell, and then she wanted to tell them all, which inevitably lead to neither of them being particularly good.

From Insular to F for Effort in Expansive

A Little Life was so very contained in the way it was told. While I loved that story, it was so hyper-focused on characters and their relationships, so completely insular that it was entirely unbothered by context, by culture or anything on the more macro narrative level. In To Paradise, Yanagihara tries to do the opposite and in my honest opinion just fails on every level. First of all, I found the first part set in an alternate post-civil war America so very weird. The society is very sexually liberal, but it’s still anti-Black and kind of classist. I guess that the idea here was to make a point how America will always be racist, no matter what, that that’s what it defaults to, but Yanagihara wasn’t very good at making that point. She never engages with that in anyway, but instead focuses on some incredibly trite story of the pauper and the prince and forbidden love. It was dull, but moreover, it was deeply frustrating that we had this specific alternate history and for what? It’s truly disquieting. Yanagihara also fell into so many cliches in her narratives, it was so bad. Like I think this is an objectively bad book. It’s not badly written but from a narrative and technical standpoint, it is just not very good. The way Yanagihara tackles class is also incredibly superficial and also borders on a cliche. Like listen to “I am a Girl Like You“ from the hit movie Barbie: The Princess and the Pauper, it’s more compelling. Finally, we have to talk about the last part, with its dystopian totalitarian society that makes NO SENSE. It’s a totalitarian pandemic-ridden world, with quarantine centers that people are forced to go to when they are sick, there are food rations, it’s extremely hot and there’s no water. And all of that is plausible, but then there are absolutely insane parts, like needing clearance to read mystery novels or something like that and WHY. EXACTLY WHY WOULD THAT HAPPEN. Nonsense. And again, Yanagihara just did nothing with it. There wasn’t anything interesting being said, or explored, and even the setup was just so predictable and seen a thousand times before (and done better a thousand times before). The characters having the same name also serves no purpose besides it being called clever in some literary interview, while it just makes you forget the person’s name. There are also little nods to the previous parts, for the same purpose, but I just found it so uninspired. This is a deeply uninspired book.

Choises Were Made, and All of them Were Wrong

The thing I hated most about this book was that the narrative choices that Yanagihara makes are so frustrating. In every single part, she specifically chooses to focus on relationships and characters that are boring, when there is so much potential in other characters she chooses to ignore. For example, in the part 1 of the second part, instead of focusing on David and Eden’s relationship, with Eden being the single most interesting character and their dynamic being the one that has the most potential, we get maybe two pages of that before going back to rich, privileged men’s problems. Again, in part 2  of the second part, instead of focusing on David’s relationship with his mother or even Edward, we get just a lot of fodder. In the final part, there are two storylines, with one being infinitely more interesting (and my favorite of the whole novel), but again, even here, there was so much room and potential to explore interesting dynamics and yet literally nothing happens. All of the storylines end abruptly and in an unsatisfying way. And I do not mean there are open-ended endings, or endings that are not neatly tied, not at all. They just end and you can see that Yanagihara had no idea where the stories were supposed to go. It was so aimless, there was no driving force behind them. Instead she overwrites, and delivers a deeply frustrating book that is over 700 pages of just plain dullness and bad choices.

Emotional Genius It Is Not

Calling this a work of emotional genius is so unhinged to me. You can call A Little Life emotionally manipulative, but it’s hard to argue that it is not emotional and that she does not construct great characters. The characters in To Paradise are mostly dull, with some of them being even nonsensical. I cannot say that they are one-dimensional, not really, but they feel like characters you have read about a thousand times before, but somehow less. Less engaging, less emotive, less interesting. This book just never made any emotional impact. Every single story is from a privileged point of view, even when Yanagihara tries to not make it so, but there’s no actual engagement with that privilege. And the relationships that are being explored are rarely done well, overfocusing on minute, irrelevant details instead of the actual dynamic. And there are moments when the relationship tension gets really interesting, and there are great nuggets in it, but it never goes anywhere beyond brief moments of potential greatness amidst the incredibly trite and superficial. And frankly, stupid. Plain and simple, and I am truly sorry to say, I found a lot of this novel to be stupid.

Truly elated that I have finished this finally because I hated it, and also surprised the lenghts I am willing to go to just to be able to participate in the discourse. I would not recommend this unless you hate good books. The one star is for me because I finished it.

Let me know if this is one your TBR, and if you have gotten around to it – did you like it? Thoughts to share? I’d love to know.

19 thoughts on “The Vibe Continues to Deteriorate: To Paradise by Hanya Yanagihara Review”