These stories gave me the nostalgic feeling The Cursed Child should have provided.

So a little while back, Pottermore (the site for all things HP, like House sorting or Patronus determination) launched a short story collection that mushed together all sorts of writing that J. K. Rowling did for Pottermore. I read all three of them back to back, so I am gonna tell you how I liked each of them and what I think of the concept as a whole.

1. Short Stories from Hogwarts of Power, Politics and Pesky Poltergeists 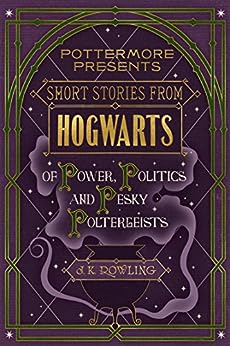 This was my least favorite in the collection. I just felt like all the stuff thrown in was random and did not make sense together at all, so that’s why I enjoyed it a little less. There’s a bit here on Umbridge which I really enjoyed, because I find her character fascinating. Also there is a story here on Ministers of Magic, which was kind of boring, and I did not really like it. My favorite bit in the collection was the story on Slughorn, which again is one of the most fascinating characters in the books for me. Definitely recommend this collection just because of that story, however, the rest of it is nothing special. But if you’re a big HP fan, you’ll enjoy any sliver of writing Rowling throws your way, and that goes for this as well. Oh and there’s a story on Peeves, so that’s fun.

2. Hogwarts: An Incomplete and Unreliable Guide

This one was a lot of fun. I liked exploring all the nooks and crannies of Hogwarts. These are just little, tiny snippets, but I still really enjoyed it. There’s a part on The Sorting Hat, and the phenomenon of hatstall (when the hat can’t decide) which I think is really fun. There’s a bit on the Hufflepuff Common Room which was interesting as well, and overall I had a lot of fun with this one. And as a whole, it definitely made more sense than the previous one mentioned.

3. Short Stories from Hogwarts of Heroism, Hardship and Dangerous Hobbies

Such an easy favorite. The star of this collection is the story on Minerva McGonagall which was SUPERB. Loved getting this different, more emotional side of her, in addition to the badass one we already know and love. I think Rowling did an awesome job here and an insight to McGonagall’s life outside of school and outside of basically Harry’s version of her was awesome. I also loved how her friendship with Dumbledore was prominent and I loved every bit of it. The rest of the stories are also really awesome and interesting and this collection is by far my favorite and I strongly suggest that you pick it up.

So overall, I really enjoyed reading all of these and I’d definitely recommend them to anyone who loves Harry Potter. They gave me such nostalgic feelings, the ones I hoped for in The Cursed Child, but never got. I will note that none of this felt like it was in the mix when the series came out. A lot of it felt like it was written after the fact, already influenced by the fan base and everything that came after the series. However, this isn’t necessarily a bad thing. I think it’s spectacular that this series has a life of its own, and it’s expanding beyond the canon of the books. There’s so much room for growth and new content, and I am not about to complain about that (except when it comes to The Cursed Child, there’s stuff even in these stories that contradicts that book).

Hope you enjoyed this and I’d love to know: what’s your Hogwarts house and what’s your Patronus? Please let me know in the comments!